Our beautiful second store opened its doors in June 2018, located in the fancy 17th district of Paris.

Noam imagined this place not only to come buy terrariums but to feel a real difference and come talk about plants and life in general.

Twice a month on sundays you can come and create your own terrarium : the workshops are organized by Antoine, a true plant lover. Deborah is able to conduct the workshop in English if needed. You can book online, or in our stores. 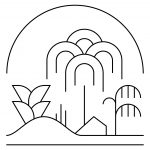 Sampaix's story has to be known: Noam opened this place at first only as his atelier to finalize his terrariums prototypes on which he has been working for 3 years.

Together with Anna, they opened the place as the first terrarium shop in the world in september 2014.

Two years after, they write the book Terrarium released in 2016. Today, the Atelier has been in many international guides and still a place you have to stop by !

All the compositions are still handmade in the small atelier just behind the store.